Center For Dermatology Erik B. Hurst, MD Our Services Melanoma 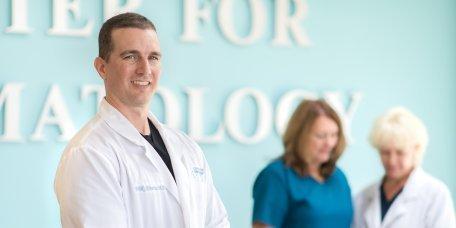 Have you noticed a questionable mole or other lesions on your skin? Melanoma is called the most dangerous form of skin cancer because it can spread quickly and become fatal. However, it’s curable when caught at an early stage. Dr. Erik B. Hurst offers skin cancer screening and treatment for melanoma through surgical excision at his Center for Dermatology practice in Martinsburg, West Virginia, and Hagerstown, Maryland. If you’re concerned that you or a loved one might have melanoma, call our office to schedule an appointment.

When melanoma goes unrecognized and spreads to other parts of your body, it becomes difficult to treat. As a result, it causes more deaths than any other type of skin cancer.

Am I at risk for melanoma?

You may have a higher chance of developing melanoma if you have a family history of skin cancer or if you have fair skin. Your risk also increases if you had blistering sunburns as a child. Cumulative exposure to sunlight over the years and sunburns as an adult are also risk factors.

What are the warning signs of melanoma?

The first sign of melanoma is an unusual-looking freckle, brown spot, or mole. While melanoma can appear as a new lesion, it often develops from an existing mole. You can catch melanoma at an early stage by checking moles for changes in their appearance.

There are two methods for identifying problems in moles:

You can identify a mole that looks different by comparing it to other moles in the area. A mole is a concern if it stands out from other lesions.

This acronym tells you what types of changes are warning signs of melanoma:

How is melanoma treated?

Dr. Hurst treats melanoma by surgically removing the lesion along with enough surrounding tissue to be sure he has removed all the cancer cells.

He also uses Mohs micrographic surgery, which is the most effective treatment for skin cancer. While Mohs surgery is primarily used for other types of skin cancer, Dr. Hurst may consider using it for some cases of melanoma.

If you see changes in a mole, or if you’d like Dr. Hurst to screen for skin cancer by examining your moles, call to make an appointment.

Treatment of skin disease including but not limited to:

As a MOHS trained physician, Dr. Hurst is pleased to bring this highly specialized surgical treatment for skin cancer to the Martinsburg and Hagerstown areas. Please visit our page on MOHS Surgery to learn more.